Other than video games, my main passion is women dressed in suits, with drawn on pencil-thin moustaches movies. Whilst I haven’t kept a complete tally of how many films I’ve watched, I know it’s thousands upon thousands, with a personal best a couple of years back of about 200 in one year. I’ve seen a lot of the greats and most of the classics. But more importantly, I’ve seen plenty of the worst movies ever made.

I don’t mean some crappy horror sequel from 2006. I mean truly atrocious films of no redeeming quality. Shit like The Starfighters, Zombie-a-Go-Go and Americathon. I’ve also seen awful films that, somehow, remain wildly entertaining; R.O.T.O.R, Voyage of the Rock Aliens, Animal Protector and Guardians of the Galaxy Vol. 2.

So many times, the question is asked “What is gaming’s Citizen Kane?” Aside from this being one of the very worst questions ever to leave anyone’s lips, we’re also yet to find a true and fitting answer. But forget the artsy classics. What I want to know is when does anybody ever ask “What is gaming’s Death Wish 3?”

Well, if they ever do, you look ’em dead in the eye and you tell them it’s Earth Defense Force 5, baby. 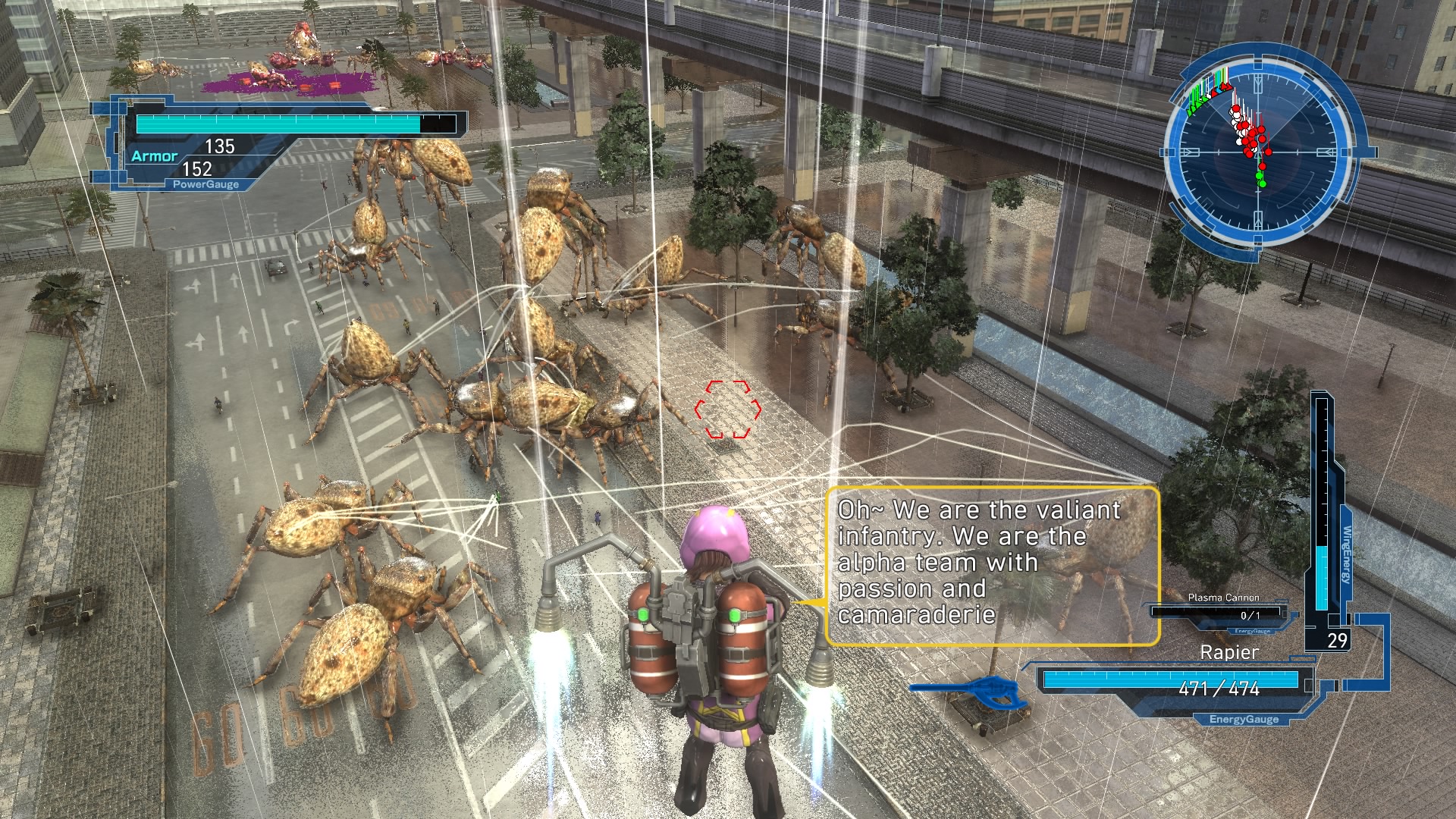 Originally launching on the PlayStation 2 as Monster Attack back in 2003, Earth Defense Force has since gone on to garner a dedicated fanbase with its B-movie tales of humble Earth soldiers versus armies of giant insects, amphibians and other monstrous terrors. It’s now 2018… and things are kind of the same. Like a lot of video game franchises, only minor alterations have been made to the format, with the core gameplay remaining essentially comparable.

In Earth Defense Force 5, this newest release in the monster-mashing series, players pick from a class and sally forth to combat the newest bug threat. There’s the standard, ground-based Rangers, the slower but heavier-hitting Fencers and, hilariously, a sexy, all-women airforce known as the Wing Divers, equipped with jetpacks, plasma cannons and a short-range laser gun with a migraine-inducing firing effect.

Once you pick your character and start the training mission, Earth Defense Force 5 lets rip with its mission-based story mode. It’s about 30 seconds into mission one that something becomes readily apparent. Technically, aesthetically and narratively, EDF 5 is an amusing mess.

In keeping with the spirit of the series and the overall style of the game, (but simultaneously as a cop-out for its own genuine flaws), EDF 5 is the proudest piece of trash I’ve played in a long time. The controls are clunky, the A.I is barely existent, the gameplay is decades old, the graphics are last-gen and, without hyperbole, the constant stream of spoken dialogue is on a par with the original release of Resident Evil.

The player and their put-upon squad of soldiers are flung into battle with en masse armies of giant ants, spiders, mecha-wasps, flying toads, drones and other some weirdies I won’t spoil here. Gameplay is simply mindless, you just open fire and don’t stop, as the enemy falls through walls and floors in its desperate attempts to reach you.

Every one of the 100+ single-player missions follows a similar M.O: run to the squad of “monsters” (the characters keep saying “monsters” every few seconds, in what is clearly an intentional joke and a legitimately funny one), and wipe them off the planet. Sometimes these hordes will spawn from generators, which must also be destroyed. Keep you and your crew alive, destroy the weird, glitching mass of beasties, and once you’ve caused enough wanton destruction, you’re good, soldier.

Classes, weapons and gear level up as you progress, with the in-game arsenal expanding to feature various types of weaponry and armour. Surely including sniper rifles in a game like this is some kind of punchline though, right? Vehicles also come into play as the missions progress, so if you ever wanted to be chased by a horde of jumping spiders, whilst on a motorbike, with a rocket launcher, brother, have I got the game for you. 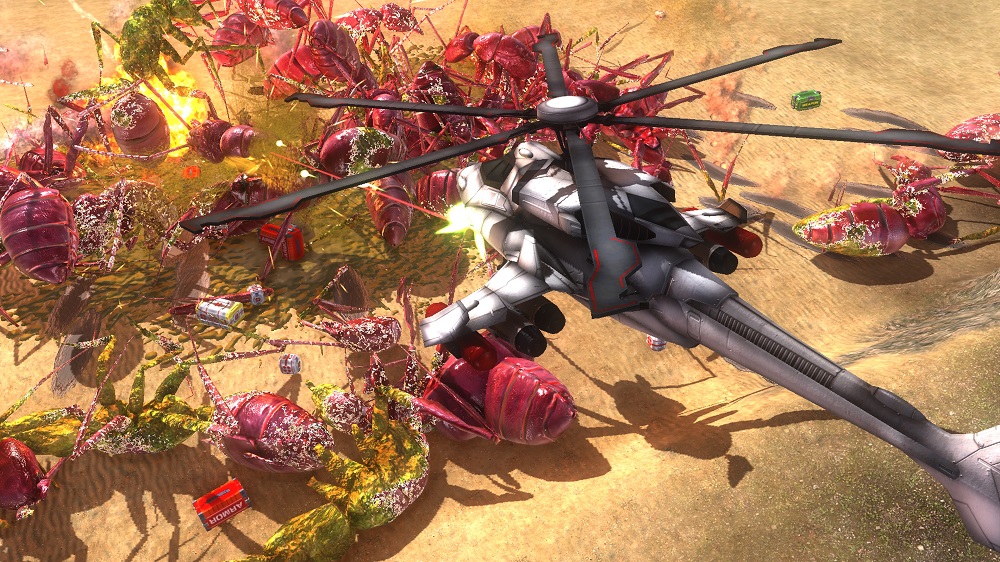 At every turn, something about the game is just bad. Power-up crates simply vanish on pick-up. Monsters block the camera, get stuck between buildings, or even wander straight past you and off into some far-flung corner of the map. Your A.I. brothers-in-arms have zero initiative, walking backwards into battle, or facing the wrong way whilst talking to you. For all intents and purposes, D3 Publisher has put out a game that, whilst still above the standard of a no-budget indie-title, is still a snug fit for the latter’s trappings.

But, despite all this, EDF 5 carries with it a baffling magnetism and charm, a sort of shrugging self-awareness about its own crapness. It’s like Sandlot know they don’t have the budget to make Marvel’s Spider-Man, so instead just made their game the cheesiest, most comically broken and balls-to-the-wall chaotic shooter on the market.

We’ve established EDF 5 is Not Great. We’ve also established that the game is willing to meet the player halfway with “Hey, we both know this is rubbish, but let’s have some fun with it, yeah?” But what happens to that joke when you’re paying top dollar; money that could be spent on better games? Therein lies the real question of recommendation.

When the game is goofily poor, as well as being legitimately repetitive, dated and janky (stuttering frame-rate and awful cameras are no joke), is it still worth your cash? I think it’s fair to claim that EDF 5 will please most of its dedicated fanbase, who have long come to terms with the franchise’ mindless mayhem and less-than-stellar technical prowess. But for everyone else, this campy, cathartic nightmare is only worth grabbing on a rental, or in a sale. Unless you’re a hardened EDF’er, do not pay $60 for this game. 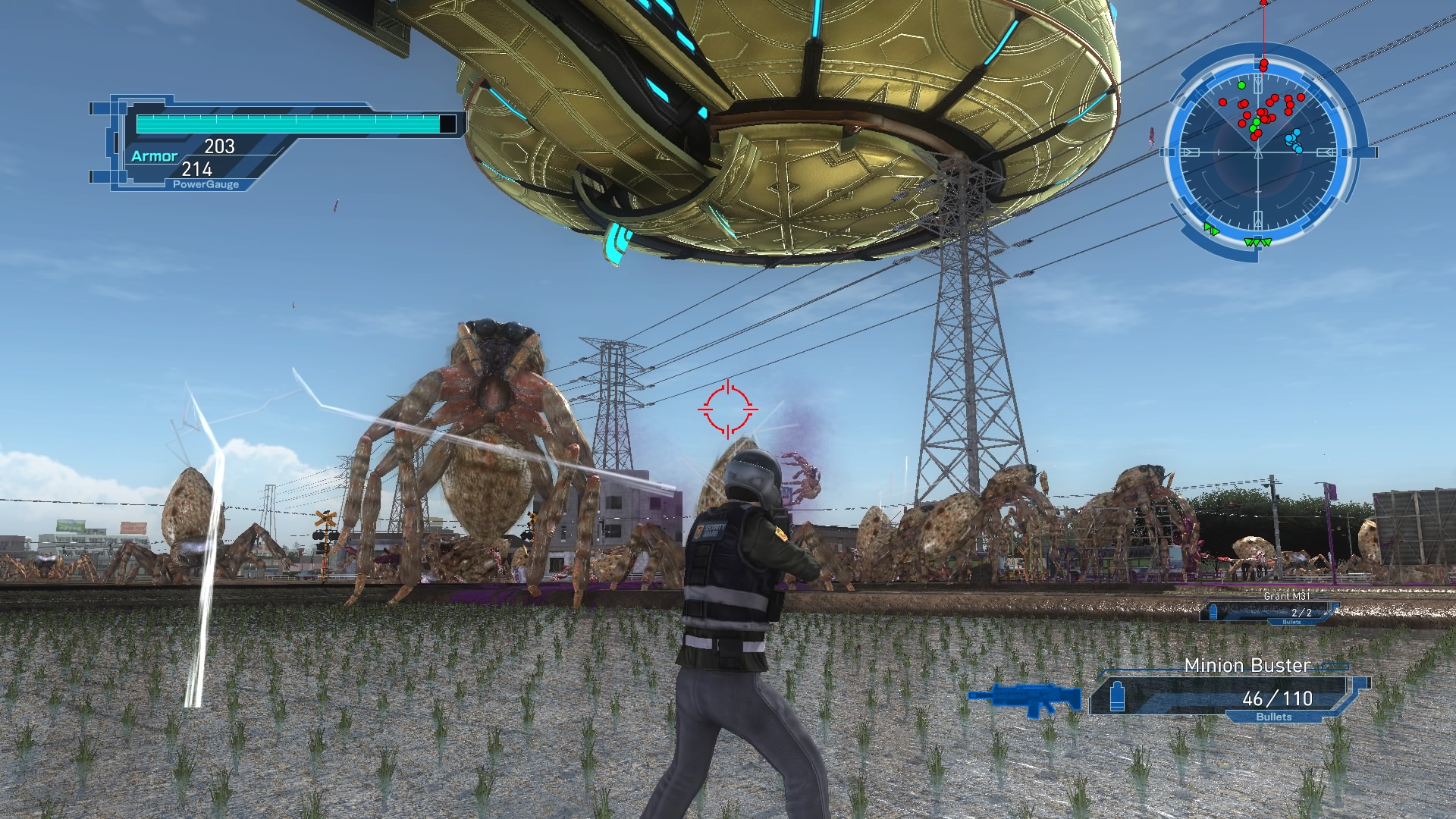 Earth Defense Force 5 is certainly not boring, and is entertaining in short bursts. I think there is an insane gaming experience here that has to be played to be believed. But, looking at things a little more sensibly, if you have the cash to purchase a video game this month, there’s some genuinely amazing titles on the market. I’m first in line to cheer for the concept of “So Bad it’s Good” – definitely in effect here in  EDF 5 – but the price has to be right, lest the ultimate joke be on you.

It has been a long time since I’ve played a game so self-aware of its own flaws, yet so proud to embrace, even celebrate them. This alone makes Earth Defense Force 5 worthy of a few hours of your time. But at the end of the day, they are flaws, and there are many of them. So while there is fun to be found in this latest bout of intergalactic mayhem, just make sure you pay a fitting price for the ticket to ride.

[This review is based on a retail build of the game provided by the publisher.]

Slightly above average or simply inoffensive. Fans of the genre should enjoy it a bit, but a fair few will be left unfulfilled.
How we score:  The destructoid reviews guide

The Division 2 release date, news, trailers and everything you need to know